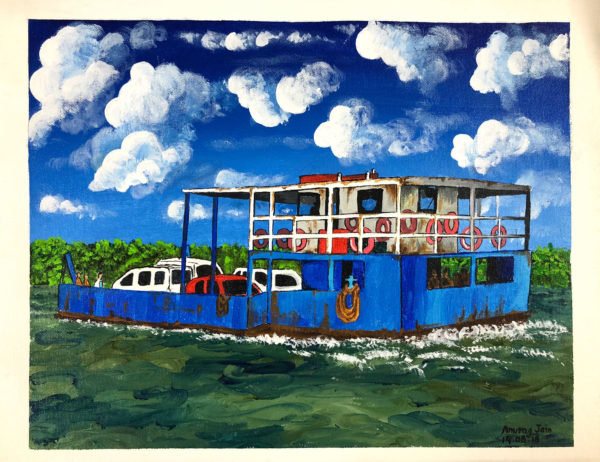 This painting is inspired by a snap I took many years back. I took this as a challenge mostly to understand how to paint clouds and waves. I do admit I went a bit overboard with the clouds, perhaps a little less of them would help. The gradients in the sky could have been better as well, I should have perhaps put some off-white zones so that the sky is not totally blue. Again with the sea I was not totally happy with the way I did the waves, which was basically dabbing the color in different mix of green with hints of black, white and blue and making a sort of elongated horizontal 8 with the brush, but its a learning experience, and I hope to do better. The tiny details, like the people who can be seen at the end of the boat, and at the start, and the driver/skipper sitting on top, to the coir ropes, and small lifeboats were a bit difficult. I am happy with the way the boat shows rust signs. The biggest achievement for me was the green foliage in the background, I really managed to get that right. Its really simple, few rough dabs of dark green, and then few rough dabs of light green with a small flat brush. You just need to tap the paint on the canvas rather than have a brush stroke. The fine lines of the boat did make me spend some time over it. In the end it looked more like a cartoon strip painting, which is acceptable to me ;)

For those interested here is a link to the original snap https://www.footwa.com/the-goan-ferry/2250/, you can see differences in the photo and painting specially with the color of the sky and sea, but these were intended changes.